AGM
The AGM was held on Sunday 28th June 2020 by Zoom, commencing at 10.30am. Our thanks are expressed to all of those members who sent in their Proxy Forms to enable us to formally run the meeting.

As nominations did not exceed the numbers required to form a Committee, the meeting approved of the following appointments for 2020,

The President noted that there would be an adjustment to the Sub-Committee structure, as follows, and will be finalised at the first General Committee Meeting to be held:
Executive
Functions & Events
Membership
Sponsorship, Promotions & Communications
Merchandise & Memorabilia
Current & Future EFC Developments

All members have been made aware of our new website which can be accessed at: essendonfcpastplayers.com.au and we would encourage all members to view on a regular basis as we will be reviewing the site regularly, particularly with News Updates.
The website contains a great deal of history of the Association and includes pages of names of Reserve and U19 past players who are eligible to become Associate Members of the Association. If any of our readers are able to supply any contact details for any of these past players, it would be appreciated if you could forward details to Kelvin Steel on [email protected] or by phone on 0419582992.

LOOKING FOR PAST PLAYER PHOTOS

As part of our association with the EFC, we are assisting the club in developing the Past Player Profiles by trying to include a head shot of each past player who has played with the club. At this point in time we have received a list of 127 past players from the EFC where no photos are available. Many of these required photos are from earlier times, however we will be shortly including a list of all of these players on our Website in an attempt to obtain as many of these shots as possible.
Further to the above we are asking all past players to forward us a preferred head/action shot of yourselves during your playing days at Essendon to include with the player profiles, in the event there is not a suitable copy held by the club.

Roy was a tall and slightly built centre half back when first recruited to the club but was fast for a big man. He was a solid mark and a great kick. Later in his career he played at full back and was an excellent spoiler.

COMMENTS FROM THE PRESIDENT

What a year it’s been! Having been through one lockdown already due to the Covid 19 pandemic, we are now in a second lockdown, which obviously places great strains on all of us. We wish all of our members our best wishes and good health during these very trying times, and remind you all that we are here to assist where possible, and particularly those suffering financial hardship. Due to the Covid 19 restrictions we are unable to give consideration to running any events and in particular our Annual Dinner, however should things change we will let you know.
As our Committee Members reached out to all of the EFCPP&OA membership base during the first lock-down period, we felt that it might be appropriate for past
players to reach out to teammates and officials from their own eras with the club that they haven’t had contact with for some time, to enquire on their health and other issues. We are aware that there are many of our past players and officials who are suffering illness and other complaints and most would welcome calls from past teammates. There are, no doubt, many others suffering during these difficult times that we are not aware of and would appreciate any feedback. This would be a great time to renew old friendships and contact details can be arranged by contacting Barry Capuano by email, [email protected] or by phone on 0407592979.
Considering the circumstances the team has performed very well and look to be in a position to play in finals this year, which hopefully will actually be played.

SOME CLASSIC REMARKS ATTRIBUTED TO PAST AFL PLAYERS!

Shane Wakelin: ‘I owe a lot to my parents, especially my mother and father.’
Mick Malthouse, Collingwood: ‘Nobody in football should be called a genius. A genius is a guy like Norman Einstein’
Peter Bell (Fremantle), on his University Law studies: ‘I’m going to graduate on time, no matter how long it takes.’
Barry Hall, Sydney Captain at training: ‘You guys line up alphabetically by height.’ and ‘You guys pair up in groups of three, then line up in a circle.’
Brock Maclean (Melbourne), on whether he had visited the Pyramids during his visit to Egypt: ‘I can’t really remember the names of the clubs that we went to.’
Kevin Sheedy on James Hird: ‘He’s a guy who gets up at six o’clock in the morning regardless of what time it is.’
Jonathan Brown: on Night Grand Finals vs Day Games: ‘It’s basically the same, just darker.’
Ron Barassi talking about Gary Cowton: ‘I asked him, ‘Son, what is it with you. Is it ignorance or apathy?’ And he said, ‘Barassi, I don’t know and I don’t care.”
Barry Hall (Sydney), when asked about the upcoming season: ‘I want to kick 70 or 80 goals this season, whichever comes first.’
Dermott Brereton: ‘Luke Hodge – the 21 year old, who turned 22 a few weeks ago’
Mark Williams: ‘Chad had done a bit of mental arithmetic with a calculator.’
Ben Cousins, West Coast Eagles: ‘We actually got the winning goal three minutes from the end, but then they scored.’
Luke Darcy: ‘I’ve never had major knee surgery on any other part of my body.’
Dermott Brereton: ‘That kick was absolutely unique, except for the one before it which was identical.’
Adrian Anderson: ‘Sure there have been injuries and deaths in football – but none of them serious.’
Andrew Demetriou: ‘If history repeats itself I should think we can expect the same thing again.
Dermott Brereton: ‘I would not say he (Chris Judd) is the best centreman in the AFL, but there are none better.’
Terry Wallace: ‘I never comment on umpires and I’m not going to break the habit of a lifetime for that prat.’
Garry Lyon: ‘Have you ever thought of writing your autobiography?’
David Swartz: ‘On what?’
Dermott Brereton: ‘Well, either side could win it, or it could be a draw.’

The following members have or will achieve significant age milestones between the 1st May and 31st August.

We wish you all years of health and happiness.

WHO IS THIS PAST PLAYER?
Len Halley

What did you do, football wise, following your playing days with Essendon? Moved to Western Australia and played for West Perth, then moved back to Melbourne.
What job/jobs did you pursue following your playing days, including what you are doing currently? Worked as a clerk at the Swan Brewery. Became an operating technician at the Austin Hospital
Are you still working? No
Have you suffered with any post football injuries and have any required surgery? Bi Lateral knee replacements.
Do you have any ongoing medical problems? Currently being treated for stage three melanoma.
What are your thoughts on the modern game, and how would you change any of the areas that you don’t like! The game has never been better. No changes.
Do you have any special anecdotes from your playing time to pass onto other past players? Enjoy your time and give yourself the best possible chance to play for the Essendon Football Club. I had great times.
Who were your mates in your playing days with Essendon, do you keep in touch? Neville Fields, Bruce Neish, Peter Hickmott, and Ken Roberts.
Who were the players you most admired in your playing days at Essendon? For Essendon: Geoff Blethyn, Alan Noonan and Charlie Payne.
Other teams: Ian Stewart, Robert Flower and Len Thompson.
Do you have any comments that you would like to pass on about your time at Essendon? It was a privilege to have played for the EFC.

Don McKenzie – Don has served the EFC in a number of roles over many years and has always been a strong supporter of our Association in both activities and financial support.

Barry Besanko – Following his playing days, Barry has always been of great support to our Association and has now served 10 years as a Committee Member of the Association.

Formal presentations will be made to Don and Barry when an appropriate function can be arranged.

THE OLDIES STILL HAVE IT! 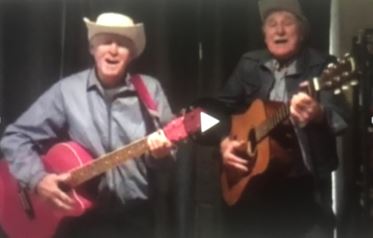 Recently John Birt and Hugh Mitchell got together on Face Book and belted out a rendition of Bye Bye Love. This shows that you can still enjoy life during these difficult times. It also brings back memories of the times when they played together in that, following games on a Saturday, players regularly had parties and had a few drinks on the Saturday night, which inevitably turned into sing-alongs. This was great for developing team spirit and culture and still endures today, as a number of players from that era dine together at least three times per year. We guess the modern generation of players could learn a lot from the past!
Both John and Hugh are Members of the Hall of Fame and true Champions, on and off the field.
John played from 1957 till 1967, playing 194 games and kicking 303 goals, was Best & Fairest in 1961, 1965 and 1967 and was a member of the 1962 and 1965 Premiership Teams.
Hugh played from 1953 till 1967, played in 224 games and kicking 306 goals, was Best & Fairest in 1959 and was also a member of the 1962 and 1965 Premiership teams.

We are saddened to announce that Emil Eugene passed away on the 30th July, at 89 years of age . Emil was a long time great servant for both the EFC and our Association and will be greatly missed by us all. Our condolences are expressed to Mary and family.

AN INTERESTING PART OF OUR HISTORY
This is the front page of “The Sun” dated 4th October 1924. The final system that year consisted of 4 teams with each team playing each other once, with the team winning the most games and best % would win the flag. Essendon beat Fitzroy 8.10.58 to 2.6.18 in the first game, then beat South Melbourne 10.12.72 to 4.15.39 in the second game. They then went on to play Richmond in the third and final game and were defeated 6.11.47 to 9.13.67 . Richmond finished up winning 2 games as did Essendon, however Essendon won the flag because of a better %.

This finals system only lasted the one year!!!