1984 was a great year for the club winning both the day and night flags. In July Essendon easily accounted for the Sydney Swans to win the Night Football Premiership,  13.11.89 to 5.8.38, being the first team to win the night and day Premierships in the one season. Terry Daniher, Mark Thompson and Leon Baker were the outstanding players in this win.

During the season Essendon lost the services of Paul Salmon in round 13 after he had shown sensational form at Full Forward, having kicked 63 goals to that time.

Essendon finished on top of the ladder at the end of the home and away games with 18 wins and had to front up to Hawthorn in the Second Semi Final. The Hawks who had given the Bombers a hiding in the 1983 Grand Final , defeated Essendon 16.17.113 to 15.15.105 in what was descried as a “classic, last man standing” game in front of a crowd of 76,514.

The Bombers then had to face up to the Hawks in the Grand Final before a crowd of 92,685. The Hawks held the balance in the first half and although the Bombers played well in the third quarter the shooting for goal was astray with a score of 5.15.45 at three quarter time. Kevin Sheedy made some great moves at the start of the last quarter, switching Paul Weston from Full Back to Centre Half Forward, Terry Daniher to Centre Half Back and Peter Bradbury to a Half Forward Flank. The game then opened up for the Dons and they slammed on 9.6 in the last quarter to defeat the Hawks, 14.21.105 to 12.9.81. This was the highest score ever in the last quarter of a Grand Final to that time. During the last quarter Kevin Walsh was knocked senseless in a collision with Robert Dipierdomenico, but waved to the crowd as he was carried off on a stretcher. This didn’t help the Hawks cause as it only spurred the Dons on.

The 1984 Premiership team consisted of: 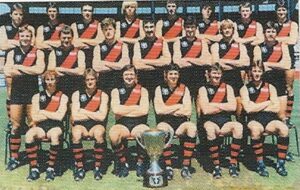