It was generally believed that 1993 would be a year of team building, particularly as Terry Daniher and Simon Madden had retired at the end of 1992 and Greg Anderson had gone back to SA.

A batch of new or nearly players, including Dustin Fletcher, Paul Hills, James Hird, Mark Mercuri, Joe Misiti,  Micahel Symons and David Calthorpe presented themselves during the year and by the end of round 19 had catapulted the team to top of the ladder and favourites for the flag. The comeback of Tim Watson was also significant.

The year started well for the team when they won the Fosters Cup and by the end of the year were not only Premiers but won the McClelland Trophy, the Brownlow Medal by Gavin Wanganeen, the Michael Tuck Medal and the Norm Smith Medal.

Essendon were beaten by Carlton in the Qualifying Final by two points, having lost five players through injury following the last home and away game against Geelong.

The team had to play West Coast Eagles in the First Semi Final and went on to win by 32 points before fronting up to the Adelaide Crows in the Preliminary final. The team performed very poorly in the first half and were 42 points down at half time however the team turned play around in the second half with one of the greatest finals comebacks kicking 11.3 to 2.4 to go on and win by 11 points. 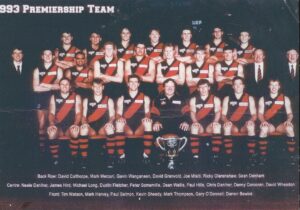