Our Fourteenth Flag - Back to Back Flags

Following on from the 1984 flag the Bombers went on to win 19 games during the home and away series. During the season the Bombers amassed 150 points in 7 games and their goal average was 18.5 per game.

The Bombers faced up to Hawthorn in the second Semi-Final and went on to win 14.8.92 to 9.8 62 having now beaten the Hawks three times during the year.

The team faced up to Hawthorn again in the Grand Final but did not have the services of Merv Neagle, Frank Dunell and Shane Heard due to injury.

The game was fast and fiery and a wild brawl started on the outer wing with most players being involved.

The Premiership Team was: 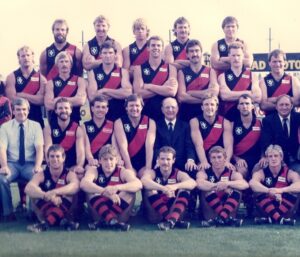