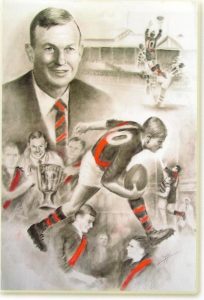 The players tried desperately to ensure that John kicked his 100 goals, and the position became humorous when Leehane marked near goal and deliberately ran up-field to hit Coleman with a pass, for his 98th goal. Then Gordon Lane shot the ball to Coleman who marked and kicked surely. Dick Reynolds gave him the one hundredth when he put a low pass onto his chest.